Sometimes the stars align.  Sometimes, the very same week you decide on a theme of “Hamster Wheel” for the October blog blast, you receive an invite from you daughter’s (the pet crazy one, ok they are all pet crazy) third grade teacher to sign up for a slot on a google doc to watch the hamster for the weekend.  It was then that I knew it . . . this blog theme was fate. It was destined.  It had to be. 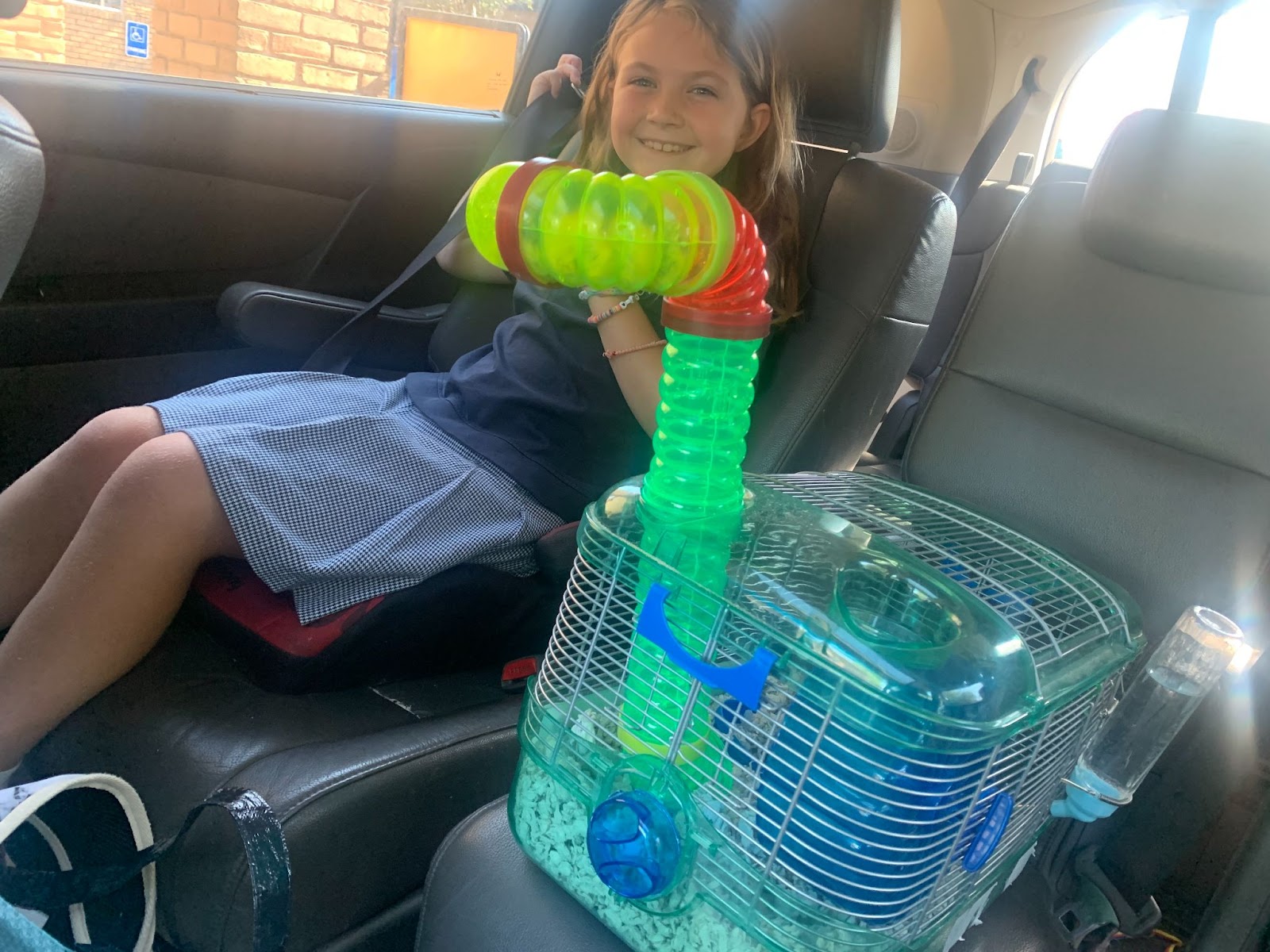 I, by the way, have a tenuous relationship with hamsters. My first main memory from hamster- nurturing was  that I named my pet hamster “Emily” because she was my best friend in kindergarten but then weeks after I got the hamster the human version of Emily stopped inviting me to play with her because she became one of the popular kids. Ouch.  Also, are there really popular cliques in kindergarten?  My second main memory: My mom picked her up and she bit her finger so hard that blood immediately spurted out.  My mom taught me a new bad word that day.  I was both fascinated and disgusted.  By both the blood and the language.  I also still to this day, 35 years later, have a poem hanging on my childhood bedroom door that my dad wrote for me that features Emily:

Julie looks pretty, with bows on her head,

We all love Julie, oh yes we do,

So on your birthday, Happy bday to you!

I would have included a picture of the poem but it is so yellow and faded that it is nearly illegible.  That is how old I am.

Anyway, those are my three hamster party stories.

So the theme is hamster wheel which pretty self-explanatorily evokes feelings of being busy, wondering if it is all, in the end, hopeless.  I mean, a hamster wheel involves a cage, aerobic activity with no end in sight, and is a pretty solitary endeavor.  Pretty depressing theme, huh?

That’s what I thought before I pet-sat a hamster with my kid for a weekend and became a hamster expert.

Guess what.  When a hamster is scared, in a new environment, threatened, exhausted, overwhelmed, etc., it does not take to the hamster wheel. I have NO idea why, but Marshmallow the adorable hamster of Carla Kelly didn’t feel totally secure for the first 12-24 hours with us. 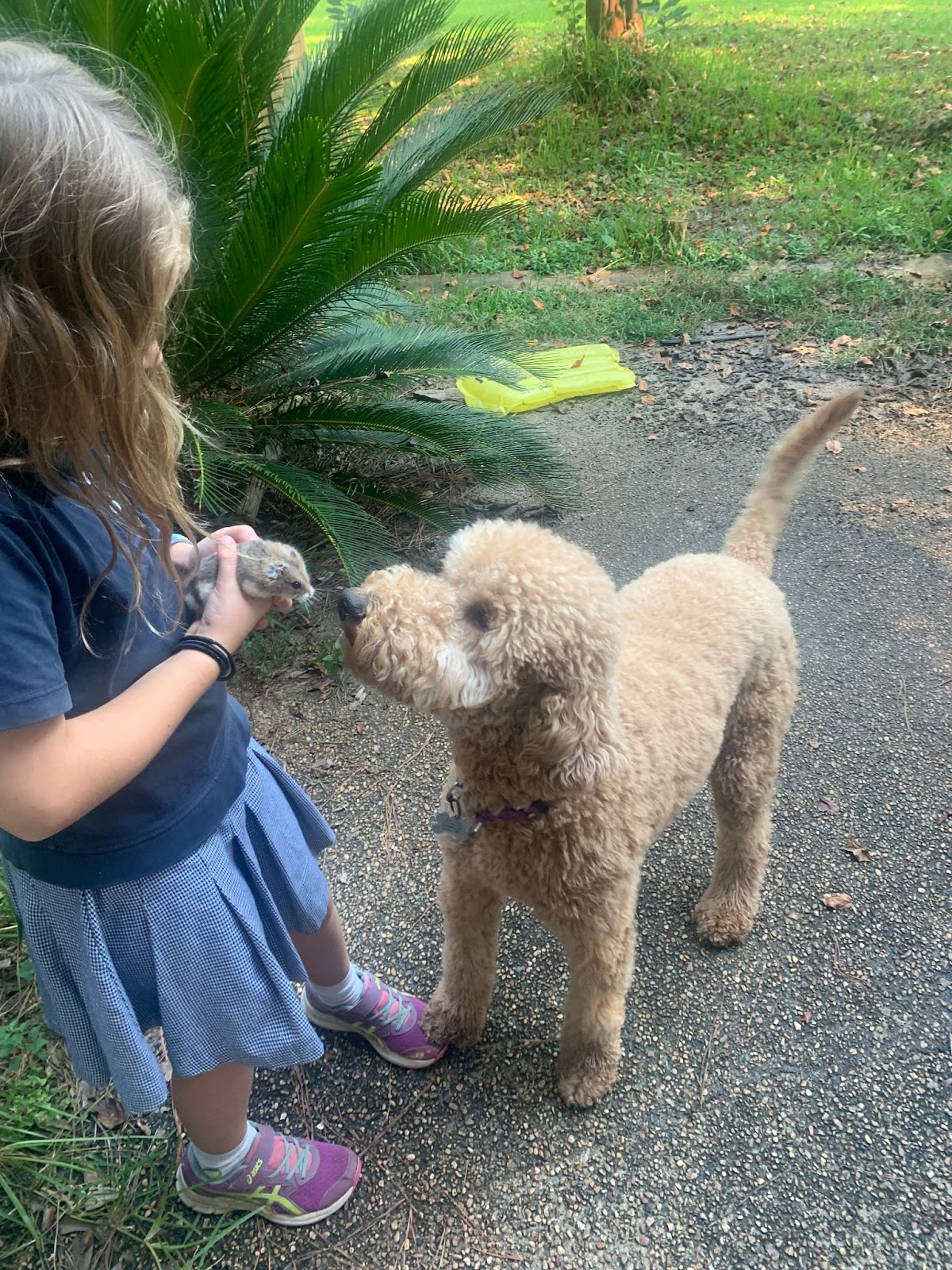 I feel like it’s important to pause here to mention that Millie the dog did not even come CLOSE to try to eat Marshmallow the hamster. The entire weekend. Not even ONCE.  However, she did have a distributing tendency to come near us and sit/beg the every time we got the hamster out, the way she does every morning when Alianna eats her warmed up croissant and shares approximately 50% of the pieces with her (“one for you, one for me” style).  So I did kinda worry for Marshy, as we came to affectionately call her. Millie also learned how to walk on two legs this weekend b/c she discovered she could get eye level with Marshy (whose cage was on the bar) when she did so.

To be fair, they DID have a blast together when Marshy was flying across the floor in her ball-thing.  Those are new.  Or new since the 35 years ago I had a hamster.  I didn’t get a picture because I was belly laughing so hard each time he got in it, but here’s the idea: 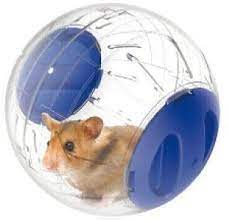 Anyway, and here’s my big hamster behavior psychology revelation: Marshy ONLY got on the hamster wheel when she got comfortable with us, which was mostly Monday morning at around 5:30 AM when I got up to do yoga.  I wish this picture was a video.  I promise he was super-sprinty.  Like impressively so.  He’s such a good boy.  The goodest. 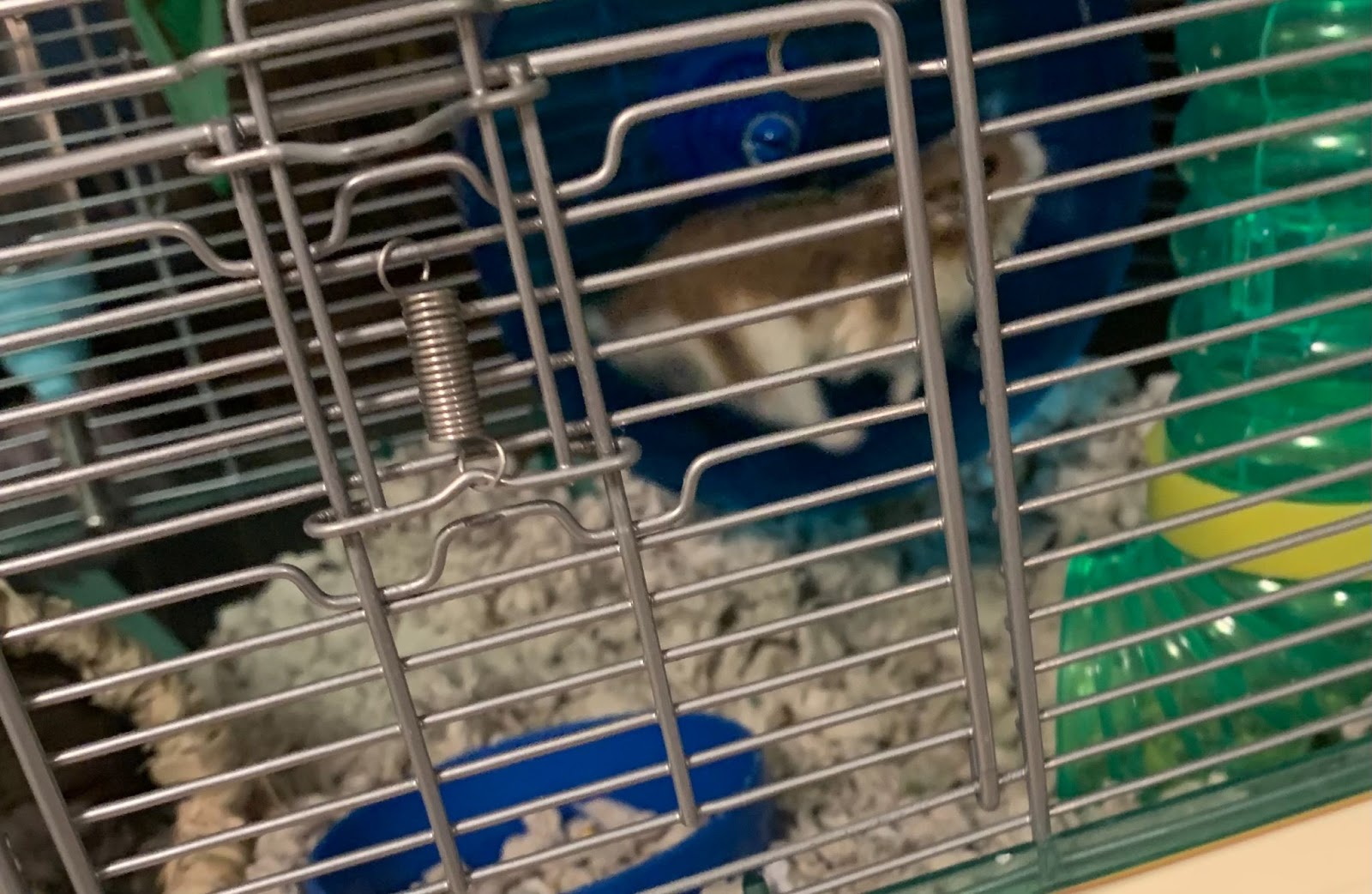 Also, he didn’t keep going at a consistent pace like I expected.  There was no slow and steady wins the race.  There were spurts of ridiculous speed and then spurts of complete calm.

The wheel was super squeaky by the way.  Like super, super squeaky.  Like everyone in the house knew when Marshy was on that thing.

So here are things I know related to hamsters and hamster wheels that I think can inform how you process every blog this month:

Thanks for the lessons, Marshy.