When Hollie Marjanovic suggested the theme of “Tis the Season” for our November-December blog blast last October, I could not stop thinking about all of the things I could complain about with that opener . . .

Bah humbug, am I right?

But then Jessica Farris sent me some amazing student artifacts to help us with this holiday-themed set of blogs.  And my entire outlook changed, as it always does through the perception and expression of some kiddos.  (Kim Sewell wrote about this phenomenon in October by the way.)  Thanks, young minds and hearts.  You make us all better.

And so, by way of introduction to our cool set of blogs this November-December, I present to you, a holiday story inspired by all of you, the beloved SA community, and these pieces of art work.  I dare you not to be in the holiday spirit after you get a load of this:

Randy the Red Nosed Reindeer: A Story of Us 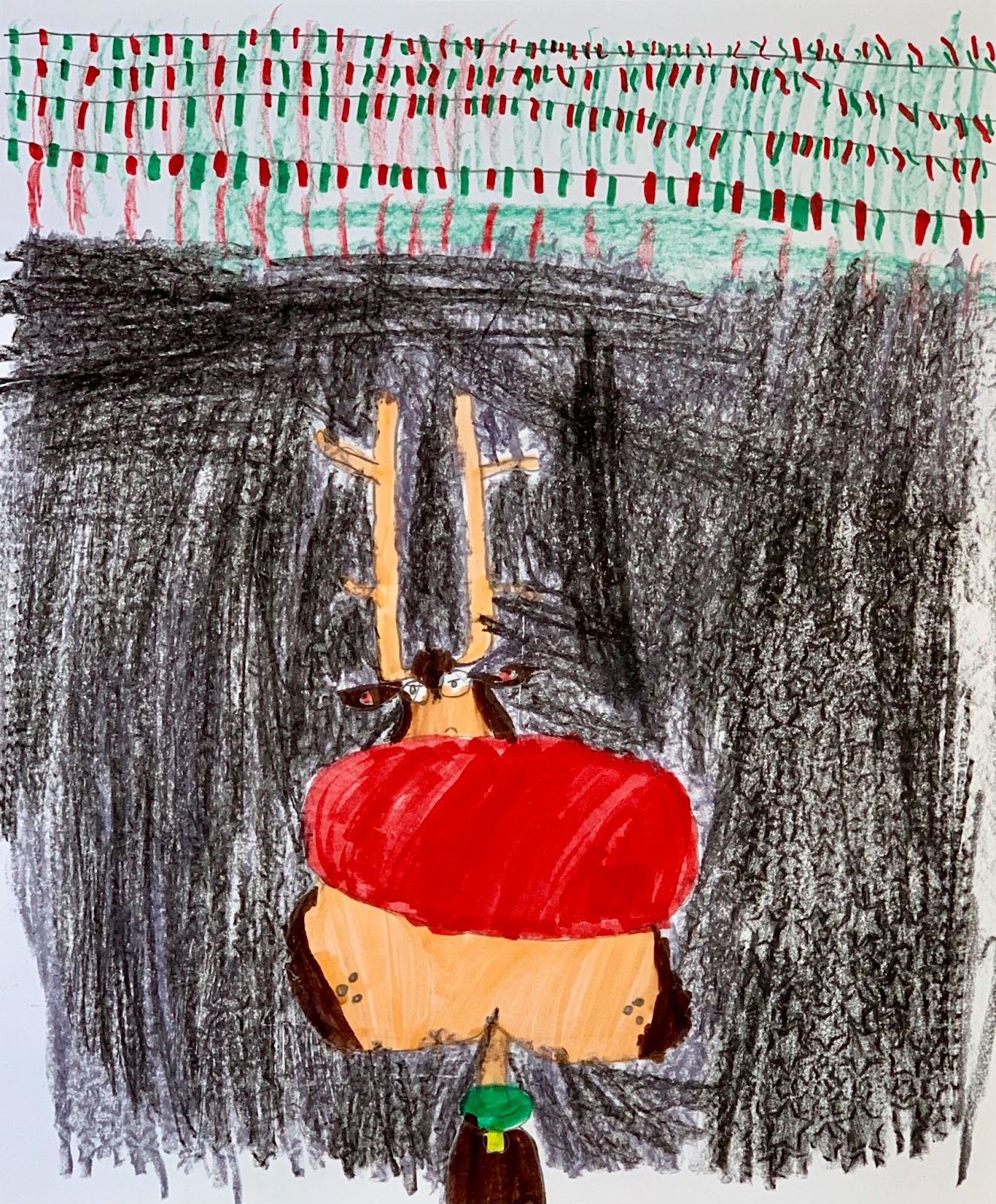 Once upon a time there was a very skeptical reindeer named Randy the Red Nosed Reindeer.  He saw the world with gray-tinted glasses.  Every time someone said a word or did a deed, he imagined the worst.  When his students failed to turn in homework, he imagined them paying Fortnite and saying into their headpieces: “THAT class?! WHAT A WASTE!  We’d never do THAT homework!”  Whenever his colleague failed to show up for a meeting he had called, he told himself a story about how much they disrespected him and his time.  Whenever an administrator sent an email, he’d delete it before reading, whispering under his breath “I’m sure it’s nothing but loads of nonsense.” Each time a parent asked to set up a meeting, he’d roll his eyes and text his best friend in the department: “Time to hear all about how darling can do NO wrong!”  Each time he imagined the worst (which was all the time), his red nose grew a bit bigger. 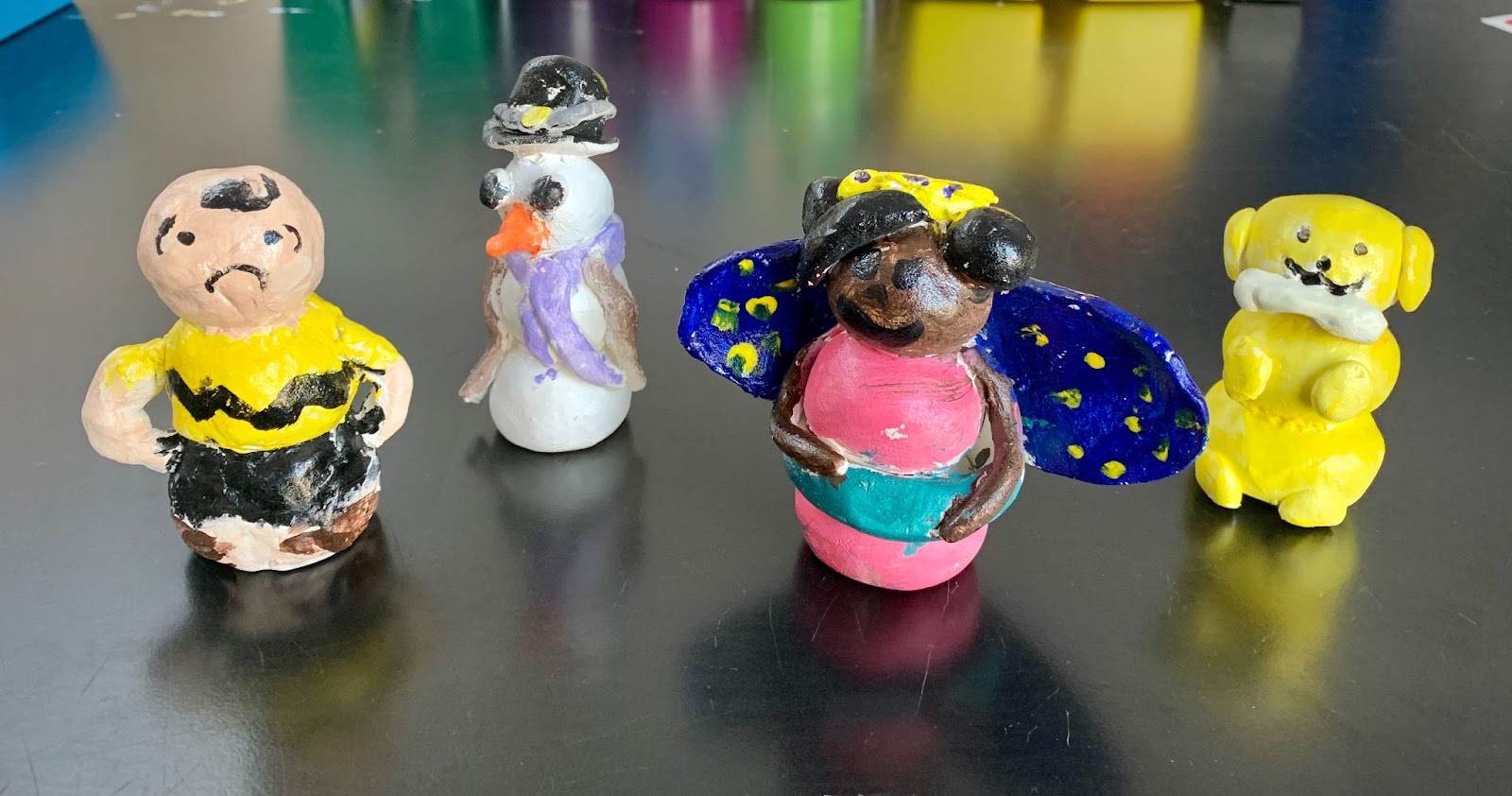 One day, a few of Randy’s friends showed up at his classroom during planning period.

“Sometimes the way you are so negative brings us down,” the sad looking Charlie Brown guy said.

“We want you to be happy and enjoy your life, so we come bearing tidings of great joy!” Angelica sang.

“Here’s a magical bone of holiday spirit that will cheer you up woof woof!” Fido barked.

Randy was skeptical, because that was who he is, but he loved those four guys so he murmured, “what the heck,” and stretched out his hands to accept the bone.  The moment he touched it, the bone began glowing warm to the touch and his nose began visibly shrinking.  He became unexpectedly invaded with warm thoughts.  It all felt so unfamiliar he trembled a bit.

Suddenly, a sleigh swooped through the sky and landed right in the student plaza in front of his classroom.

But there was no one in the sleigh.  No one at all. He tiptoed warily to look closely.  No presents either.  Of course he knew it was all a myth.  The reindeer part especially. (Everyone knows that reindeer are great at teaching math, not pulling sleighs.)  Still, something drew him to the front of the sleigh.  Without thinking, he began to pull the harness over his head.  And without any effort or deliberation or intent at all, he began leaping into the air, then floating, then soaring. It was joy. Pure joy.  The sky turned from blue to orange to dark.  He had never felt quite so fulfilled.  Just as he had so mindlessly began flying, he found himself instinctively landing the sleigh on a roof.  Still no Santa. Still no presents. Nevertheless, he pushed himself down the chimney and into a warm house.

There, a wise cat was curled up in front of the fire.

“I don’t know what’s happening,” Randy confessed, feeling his now-compact red nose.  “I’ve never felt quite so warm inside before.”

“But Santa wasn’t even in the sleigh,” Randy explained, “And I’ve always been scared of heights!”

“Flying Santa’s sleigh wasn’t what I was talking about,” the cat meowed.  “And you know it.”

She swished her tail and Randy suddenly found himself back at school, drooling into a few ungraded papers on his desk.

As he wiped his weary eyes, he looked up to see three of his favorite rapscallion students hovering around his desk.  Surprisingly, he didn’t feel a familiar wave of annoyance. Instead, he felt that warmth, still present and strong.

“Hey hey, Mr. Randy,” they said in chorus. “Check it out- we just figured out another way to solve the problem and we put the strategy into a rhyming phrase so others can remember it!”

From that moment forward he stopped waiting for Santa to appear with a sleigh of perfect gifts.  He told himself a greater range of stories about the moments and people that filled his life.  And, when the moment struck and it felt right, he pulled the harness over head and worked to affect the positive change that he could in his little community.

There are worse things to do with a life.